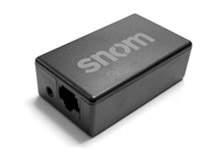 The snom Headset Adapter has an EHS interface conforming to vendor specific as well as the DHSG standard which enables the electronic reception of calls on the headset itself. When the phone receives an incoming call the original ringing tone is signalled in the headset and the call can be answered and terminated on the headset.

The snom Headset Adapter has been constructed specifically for the snom 320, 360, and 370 phones.

Whether it?s business usage in large or small enterprises or in call centers - the newly won freedom of movement will pay off immediately.