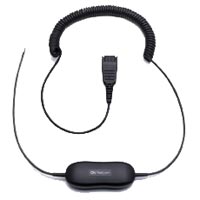 The GN 1200 cord is the solution to a common problem of not being able to connect headset and telephone. Even though most things have been standardized, the cord connecting the phone with the handset or headset is anything but standard as each telephone manufacturer has its own wiring code. Now, with the universal "smart" cord, GN 1200, the cord will work with virtually any phone providing greater convenience.