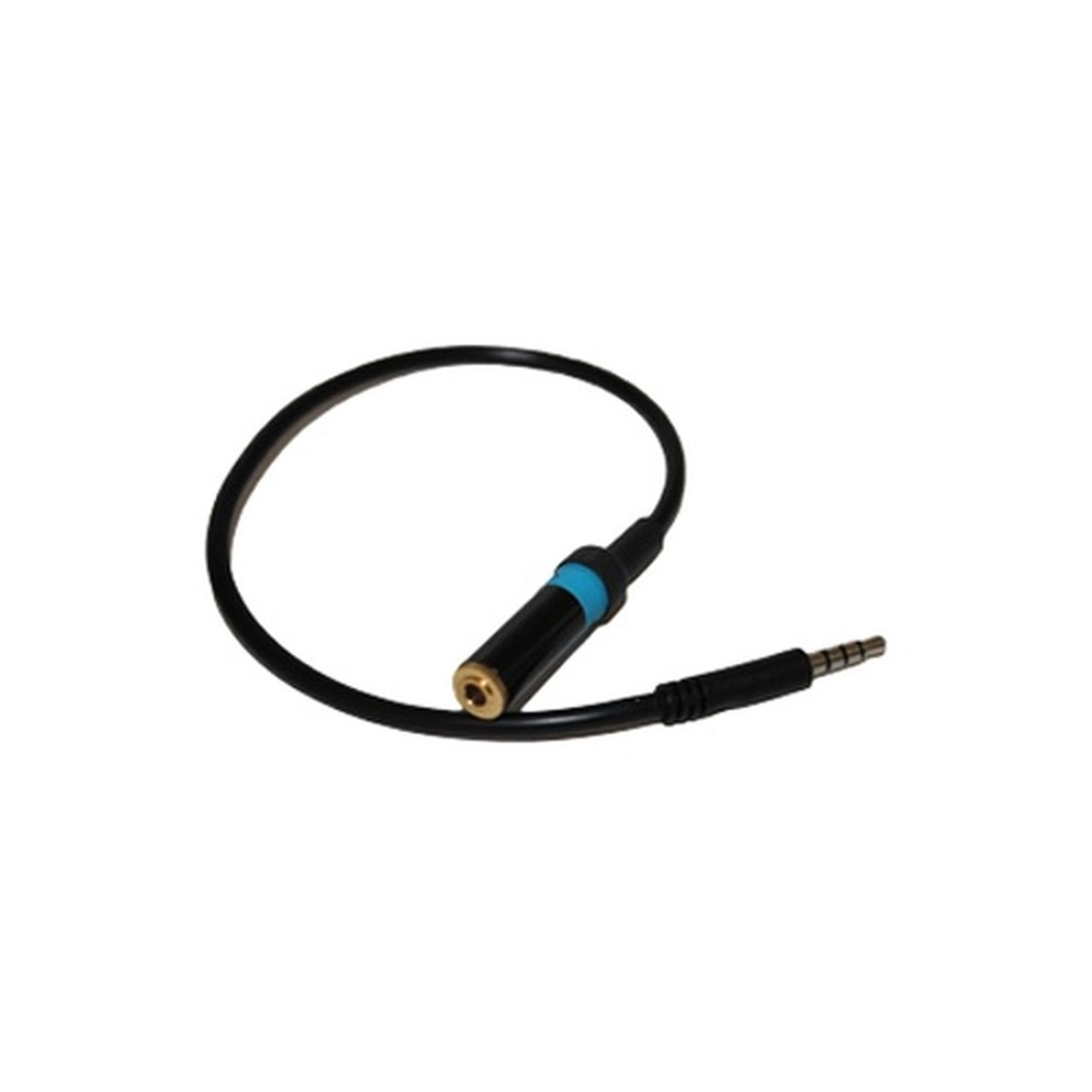 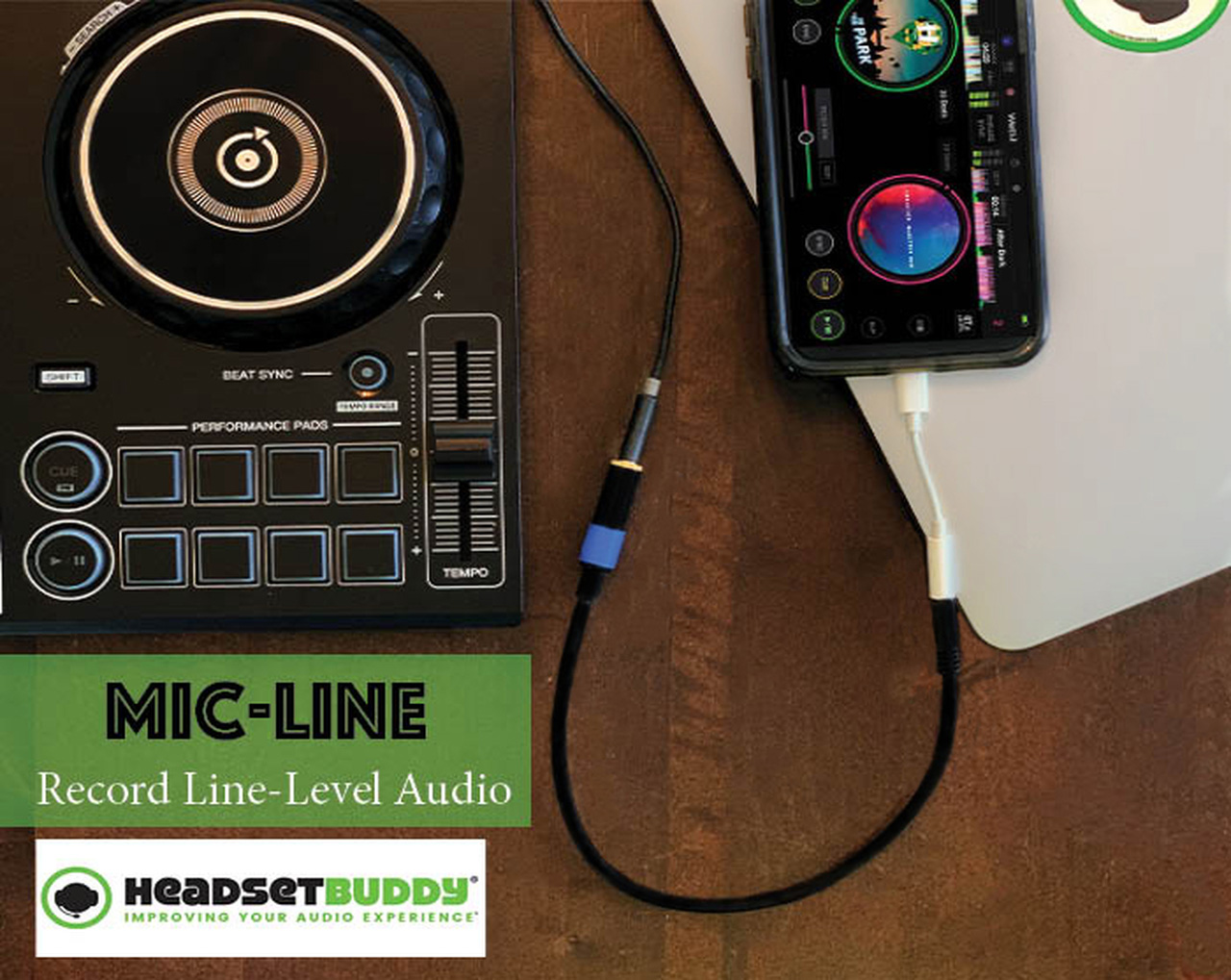 Easily record from a mixer or soundboard directly to yThe smartphone, laptop, or tablet!  The iPhone-Mic-Line replaces yThe phone's microphone level audio signal with line level input allowing you to record on yThe device as if the sound was coming directly from it. Record line level audio from yThe mixer or soundboard on yThe iPhone, smartphone. Allows yThe external audio output to replace yThe smartphone's mic. Includes line mic attenuator that allows for line-level to mic-level conversion Works with most phones that have a combined headset and microphone jack Connect two audio sources simultaneously, just use a splitter! Crystal clear sound recording, 100% guaranteed The line level input converter allows you to record audio on yThe iPhone from outputs such as a headphone jack or audio output jack such as a turn tables, mixers, soundboards or other professional audio equipment. The iPhone-Mic-Line replaces yThe phone's microphone level audio signal with line level input allowing you to record on yThe device as if the sound was coming directly from it. The cable is approximately 13 inches long. How it Works: From the line out of yThe audio source, plug in the cable required ex.(XLR male to 3.5mm TRS male).  Insert the male 3.5mm (1/8 in.) TRS plug into the female end of the Mic-Line(Blue Line In).  Plug the male TRRS end of the Mic-Line into yThe phone, laptop, etc.*   The device will recognize this as an external audio source and turn its internal microphone off allowing you to record using the external source.  Open yThe Camera App and record!  *You will need a lightning, USB-C, or USB adapter depending on yThe device. Please note: Apple brand lightning adapters DO NOT work on iPhones except on iPhone 12.  Combine yThe Headset Buddy Mic-Line product with any of these adapters for more uses: iPhone Lightning to 3.5mm Adapter USB-C to 3.5mm Adapter USB to 3.5mm Adapter PC - Smartphone to PC Headset Adapter Office Phone - Smartphone to Office Phone Adapter This adapter works with all audio/video recording apps.  For live streams; apps such as Larix work best.  To test yThe Mic-Line please watch this video: Worship The King Mic-Line Videos:   Great Customer Videos! The friends over at @studioscratches have put together a nice article on "How to Record High Quality Audio Directly into YThe iPhone" PLEASE NOTE: This adapter is NOT for recording from microphones. Please see The "Dynamic Mic to Smartphone" or "ECM Mic to Smartphone" adapters for these purposes. Also, sound input for smartphone connections is mono but most apps split the sound into left and right channels for playback in both ears. You are able to input stereo sound; however, playback will only be in the left ear.   Specs: Attenuation: -20 dBVMale End: 3.5 mm (1/8) Female End: 3.5 mm (1/8) Cable Length: 12" FAQ Q: Will this adapter work with a stereo audio source? A: The combined headset jack on the iPhone and other devices only has a mono mic input so you cannot record in stereo. Most recording apps split the mono signal into both left/right channels when recording so the audio will play back in both ears. You can connect a stereo signal to this adapter but only the left side will be active; if you use a stereo-to-mono adapter on yThe input cable then it will make both left/right channels combined and active. There is a new stereo microphone product available which will allow for stereo recording using the docking connector; this is currently the only option available for stereo recording, Tascam IM2 stereo mic.   Q: When I open Facebook Live my audio defaults to iPhone mic instead of Mic-Line, what can I do?   A: Open yThe Facebook Live app, then plug yThe lightning adapter into yThe phone!  Q: Do I need a different adapter for a microphone? A: The iPhone headset mic input is a mic-level input. The mic-level signal is much lower than a line-level signal which is used in audio outputs. This adapter has a built-in attenuator which reduces line-level signals down to mic-level signal strength. If you connect a mic to this adapter the signal would be reduced to a point that you would not be able to hear it in a recording. Use the MIC versions of this adapter for recording from microphones.   Q: Can I connect two audio sources? A: Yes, you can use a standard 3.5mm splitter adapter to connect two audio sources which will combine the signals from both sources into this adapter. Alternately, you could use a small mixer to combine the signals from multiple sources into this adapter. or purchase The new product, the Mic-Line Plus   Q: Will this work with the latest versions of iPhone that have removed the 3.5 mm headphone jack? A: Yes! However you will need to use either the lightning to 3.5mm adapter that came with yThe iPhone or purchase one of ours, which can be found here Warranty Free returns, always! We have a 30-day, no-questions-asked return policy for all of The products as well as a one-year, 100% Satisfaction guarantee; We’ll replace yThe Headset Buddy for free within the first 12 months. For further information about Headset Buddy's Warranty and Shipping & Returns policies select the imbedded links