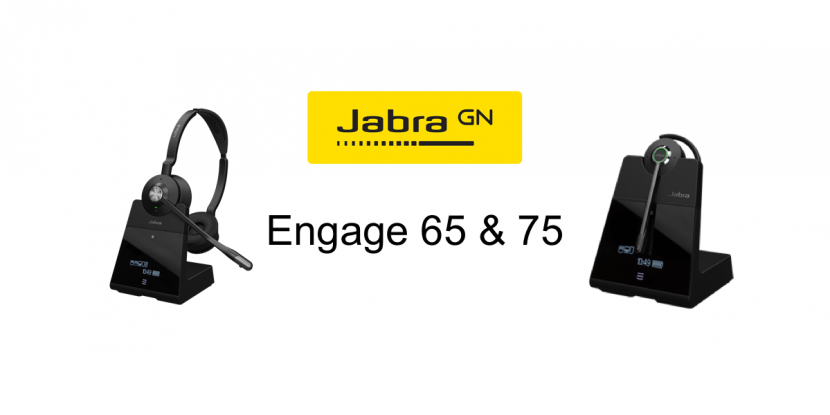 On Monday April 2, 2018, Jabra announced their newest lineup of headsets. The Engage 65 Series and 75 series replaces their 9400 headsets (not that they needed replacing) and is available in monaural, binaural, and convertible configurations. The Engage products are a culmination of the best aspects of Jabra’s latest products, and frankly, they are more capable than most competitive products at the moment. The headband and microphone designs are clearly inspired by their wildly successful Biz 2300 headset. The 2300 is known throughout the headset industry as a go-to for comfortability and microphone quality; so you can expect similar performance in these areas. The headset also features built-in busy light indicators on the microphone and speakers that glow red when you’re on a call. Jabra took this design from their Evolve 75 headset. Arguably the most impressive feature offered by the Engage headsets is their wireless capacities. Jabra isn’t saying how they did it, but they have managed to get a North American wireless wideband capacity of 80 units across the whole Engage lineup (160 in Europe)!

There are two important areas that differentiate the 65s from the 75s: device connectivity options and included accessories. They also vary in weight, though the difference in nominal. Aside from these differences, the devices are exactly the same:

The Engage 65 series can connect to two devices simultaneously: one USB device and one analog phone. The Engage 75 series, however, connects with up to five devices: two USB, two Bluetooth, and one analog.

The monaural options can switch the headband for a neckband. A neckband is included with the 75 mono, but not with the 65 mono (the neckband is available for purchase as an accessory ). Also, the 75 convertible comes with an earhook, neckband, and a headband, whereas the 65 convertible only includes the earhook. Similarly, the neckband and headband can be purchased separately.

To summarize, Jabra’s Engage headsets are a top-of-the-line option that boast the best of Jabra’s current technologies: headband design, microphone quality, multi-connectivity, and wireless capability. They will be listed on our sales site, Headset.com in the coming weeks.